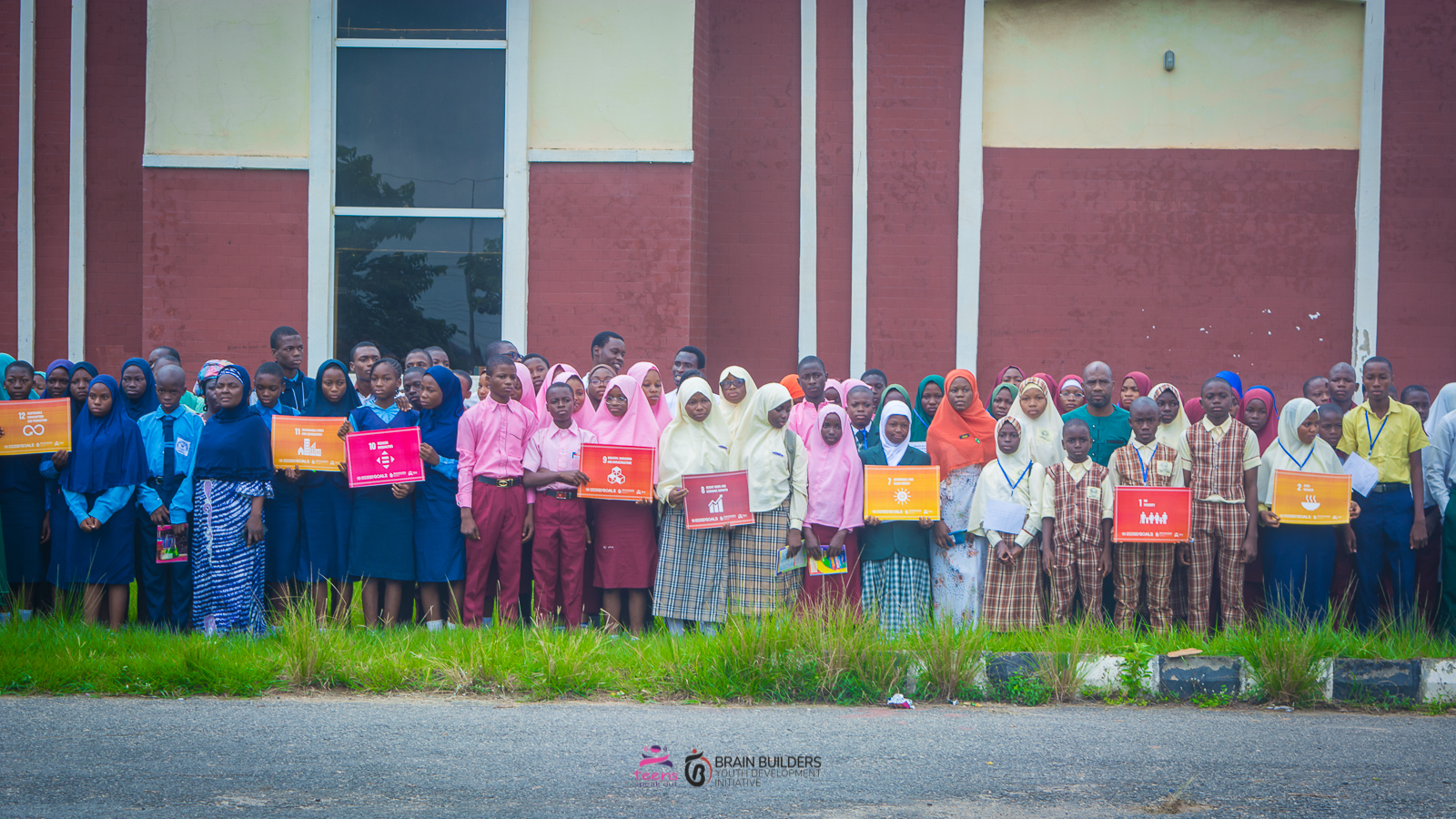 No Comments on Brain Builders Youth Development Initiative Holds Teens Speak Out 9.0Posted in Newsletter By AdminPosted on September 30, 2022November 18, 2022

On Thursday, 29 September 2022, the 9th edition of the Teens Speak Out (TSO) competition took place at Fakunle Comprehensive High School, Osogbo. This has been an annual program to impact the lives of teenagers in Osun State over the years.

Teens speak Out is a program organized by the Brain Builders Youth Development Initiative (BBYDI) to engage teenagers from secondary schools in Osun state, on National issues. The programme was put in place to enable teenagers to learn one of the most important skills in promoting Sustainable Development Goals(SDGs). Teenagers are groomed in oral advocacy while boosting their cognitive skills through the programme.

According to the leader of the program’s planning committee, Miss Mujeebah Opatola, the organization has been consistently holding Oratory and Essay writing contests for teenagers in secondary schools in Osun State.

“For 9 years, we have successfully impacted the lives of over 3,000 students in the state of Osun,” she said.

While speaking about this year’s edition, she said that 26 schools were in attendance on D-day. Each school was represented by a student in an oratory contest and essay writing contest respectively, having a total number of 52 participants.

“We had in attendance, the presence of Mr. Dare Alabi, the Chief oratory judge, together with Mr. Haneef Oladejo, Mr. Abdulrasheed Zakariyyah, and Mrs. Olarinde Rofiat who worked together in deciding the Orator of the year in Teens Speak Out 9.0.

“The essay writing contest was graded by a team of judges led by Mr. Qozeem Mujeeb with Mr. Ridwanullah Solahudeen and Mr. Oseni Qoyyum as co-judges,” she added.

According to Mujeebah, the oratory contest began with the participants speaking on the topic: “The state of Federal Universities in Nigeria: is it time to restructure the university system?”

An impromptu second round which 7 top schools qualified for was staged to determine the winners of the oratory contest.

Miss Mujeebah also made it known that during the break given for the 7 participants to prepare for the second stage, the organizers of the program played the voice recording of the Executive Director of Brain Builders Youth Development Initiative (BBYDI), Mr. Abideen Olasupo who was unavoidably absent.

In his speech, he appreciated the dedication, selflessness, and efforts of the teachers in instilling moral and academic values in the students and going above board to ensure that the students give back to society.

While stating the objectives of the organization, he did not forget to mention that contrary to popular opinion, the Brain Builders Youth Development Initiative( BBYDI) believe that the youths are the leaders of today, hence, the need to groom the leaders of tomorrow who are the teenagers as they are the nation builders.

His sincere appreciation was also extended to the panel of judges for volunteering and dedicating their time to the success of the event. His words of encouragement to the participants of the event were not left out, as he made them realize that they all are recognized as winners at BBYDI.

In the second stage which began after listening to the Director’s welcome address, another impromptu contest began between two schools (Ar Rahman Model College and Crest Hive International School) who had a tie that brought about the need for the impromptu contest.

As for the essay writing contest, Miss Mujeebah also explained that it was also an impromptu task, as the topic was given on the event day.

The topic of this year’s essay writing contest was: “2023 is another important year in Nigeria’s democracy and development. Over the years, Nigeria has continued to suffer from the menace of bad leadership. What are the Characteristics voters must look for as they elect their new leaders in the elections?”

She continued, “It should be noted that the essay writing contest was being graded while the oratory contest was going on and this gave the judges enough time to carefully mark and score the students.

“At the end of the event, Alimi Aisha from Osogbo Government High School came 3rd with 30 points, Ibrahim Aishat from Al-Mansur Model College came 2nd with 30.6points and Yusuf Abdul Mumin from Zakariyau Memorial College was declared the Essayist of the year with 33.3points.” 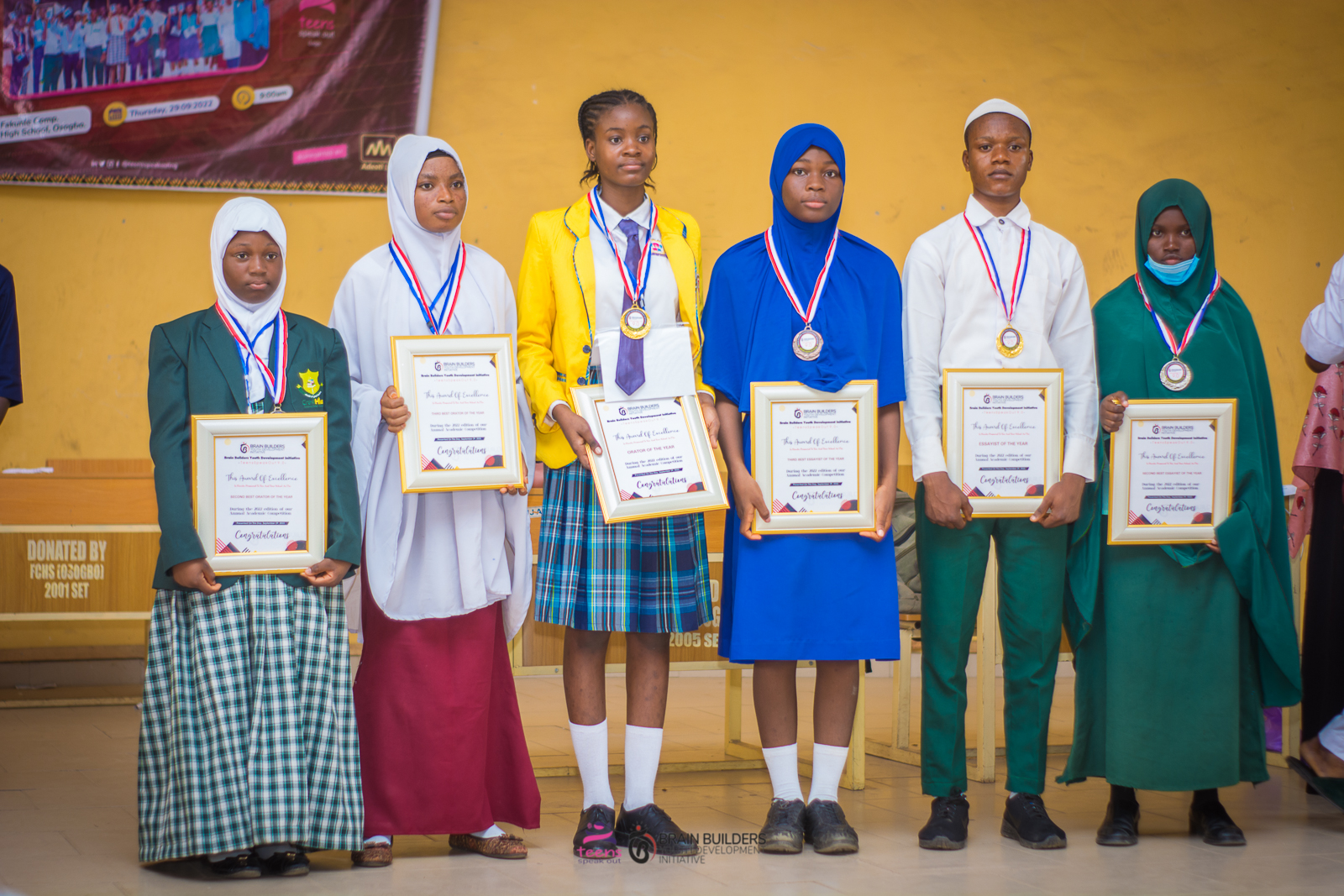 Brain Builders Youth Development Initiative (BBYDI) is known for upholding moral values in all it does and this is evident in her Teens Speak Out contest as the most punctual school at her event is always recognized and awarded every year.

It is recorded that Onaopepo Islamic Model School was recognized and appreciated for her punctuality at the programme, and for arriving at the venue 2 hours before the commencement of the programme.

In the end, Miss Mujeebah Opatola, the LOC of this year’s event, also mentioned that she is a product of Teens Speak Out and talked about how the programme groomed her, polished her public speaking skills, and helped in the journey of her self discovery.

“The Teens Speak Out’s topics every year are geared toward National Development, where teenagers are tasked to mine ideas and opinions from their brains and get them to speak out about those solutions they might have to national issues.

“I’m glad the BBYDI got the teens to speak out again!” she happily said.