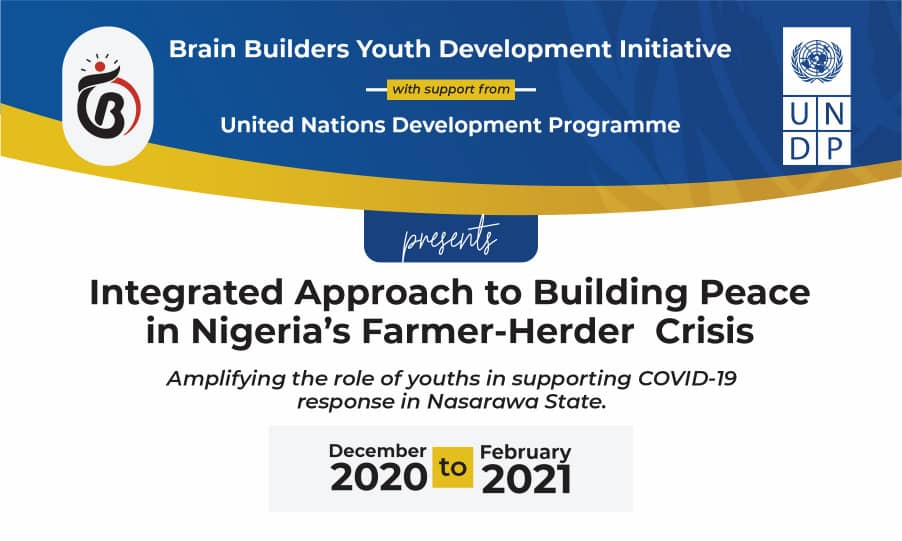 No Comments on Group To Hold Interfaith Dialogue To Address Farmers-Herders Crisis In North Central RegionPosted in Newsletter By thebrai1Posted on January 31, 2021February 12, 2021

A non-profit organisation, the Brain Builders Youth Development Initiative (BBDYI) says protracted farmer-herder conflicts in the north-central part of Nigeria could further shrink the country’s fragile security amid the decade-long war against insurgents in the northeast.

It cautioned that violent activities which have become more pronounced in the zone due to the mistrust among various ethnoreligious groups may likely plunge the country into an unprecedented humanitarian crisis.

In a report released following an on-site assessment of conflict-ravaged communities in Nasarawa State, the group highlighted the role of traditional and religious leaders in smothering the spate of killings and violence in the state.

“Since May 2015, the Nigerian Security Tracker estimated that thousands of persons have been killed in a series of violent conflicts often described in the press as “herder-farmer” conflict. This incessant conflict has become more pronounced in north-central Nigeria and they are usually occasioned by a plethora of ethnoreligious mistrusts.

“These activities have taken different dimensions such as inter-communal conflicts, conflicts between Christians and Muslims, religious fundamentalism and farmers-herders clashes, etcetera. The conflicts have ravaged many communities and exacerbated the nation’s development challenges,” it says

While meeting with stakeholders in the communities, the group’s director, Olasupo Abideen, said inter-communal and interfaith dialogue is necessary “to establish a forum for constructive advocacy, conflict resolution and early warning mechanisms in Nasarawa State”

This, according to him, would help to promote regional peace and amplify the role of youth in supporting COVID-19 responses in the state.

He said the group will adopt a community-focused strategy to train twenty religious and traditional leaders and fifty youths in ten major communities in the State, supported by the United Nations Development Programme (UNDP)

The group had earlier called for articles from young Nigerians to address the persisting insecurity in the North Central region.

Violence between farmers and herders have claimed more than 17,284 lives between 2000-2019, a report

Land resources struggle and weather are some of the factors fuelling clashes between farming communities and herders across the country, experts said.

To resolve clashes between herding and farming communities, the governor said the government would provide grazing areas to discourage open grazing by livestock farmers.

“These are huge sites with one not less than 7,000 hectares of land that is going to address our own security problem in the state,”