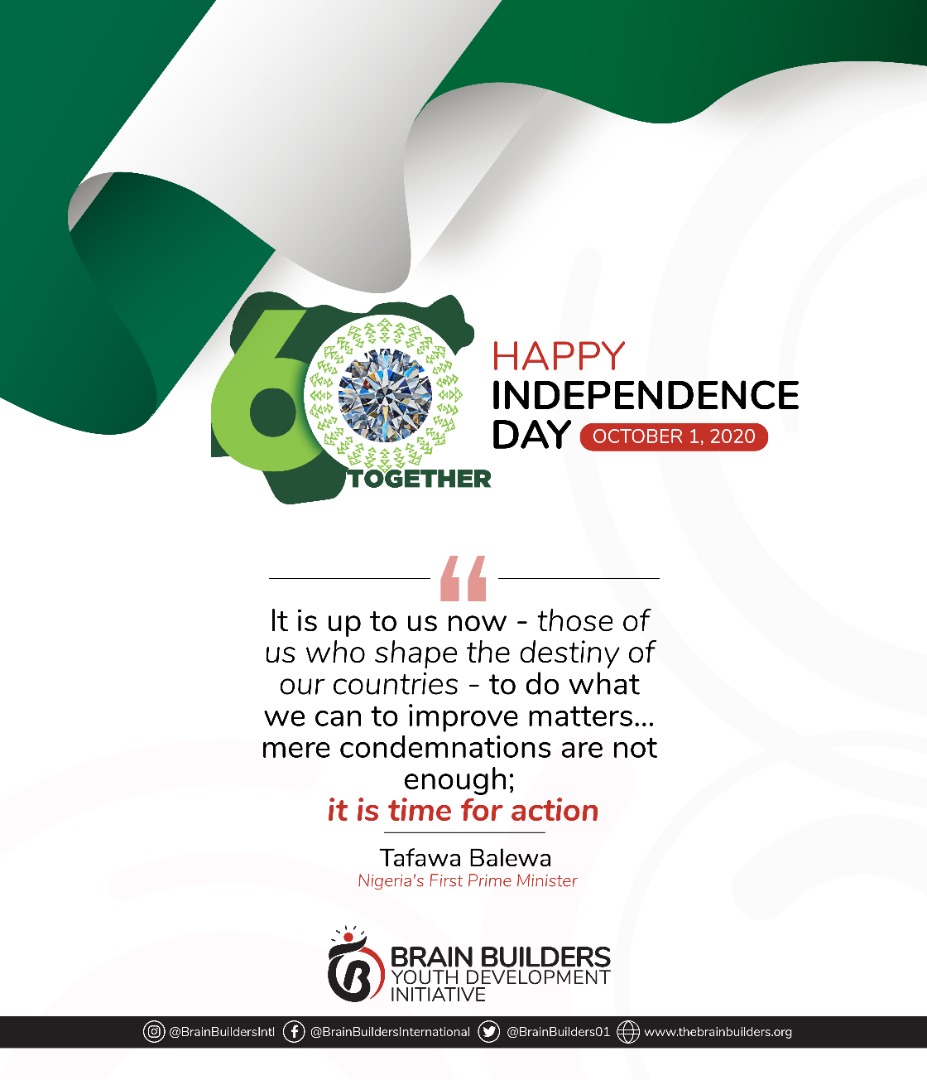 No Comments on Independence Day 2020Posted in Newsletter By AdminPosted on October 1, 2020October 3, 2020

On the eve of Nigeria’s independence, the hopes of a new country about to be born created a euphoria of positivity and a future of boundless possibilities. The leaders of the new nation were brimming with confidence and enthusiasm; citizens had high aspirations. Sadly, this honeymoon period was momentary. Freedom from colonial rule was supposed to presage an era of remarkable progress. 60 years after independence, Nigeria’s situation is a sharp contrast to the hopes and aspirations that preceded its independence.

The timing of our independence was auspicious; it came at a time of economic prosperity. Yet, 6 decades later, we are languishing in multidimensional poverty. From the early years, Nigeria has been plagued with bad governance; characterized by corruption, electoral violence, nepotism, mismanagement of resources, misplacement of priorities, etc. It became evident that the country was threading a path of failure.

We have had critical junctures in our history when things could have changed for the better. However, our history with accidental leadership meant that there was no template to build a progressive country. Marred by successful military regimes, Nigeria has failed to forge a national identity. We have failed to build institutions as evident in the lack of adequate investment in education, health, social services, etc.

Nations are built on the commitment and efforts of its young people. At 60, Nigeria is breeding a generation of demoralized young people who have no conviction in the Nigerian project. Years of failed governance, the abysmal state of our educational sector, massive unemployment, poverty, and so on are enough reasons for young people to be dispirited.

Nigeria has failed to explore its potential. Nonetheless, it is not too late to reposition ourselves for success. We must move from paper-based policies to evidence-based policies. We must redesign our institutional framework to match the realities of today. The policies that brought us to this state of affairs, will not move us forward.

In his independence day public address, the president of Nigeria, President Muhammadu Buhari urged Nigerians to retrace their steps and forge a national identity. He emphasized the importance of the rule of law, free and fair elections, upholding democratic principles, accountability and transparency by elected officials, and commitment to the Nigerian project. As an organization, we charge the president to assent to the electoral law reform. We are aware that this law was passed by the 8th senate but the president did not assent to it. We believe that reforms like this are consistent with the projections of a forward-thinking government that the president described in his speech. We hope that his government aligns itself with the ideals of democracy for the sake of the country.

We have come a long way, but we have a long way to go. This year’s independence day anniversary should be more of a reflection than celebration. Our country deserves better and we must initiate the process by reassessing our journey to this day. It is time to focus on sustainable policies that address fundamental issues.

We at Brain Builders Youth Development Initiative celebrate the Nigerian people for their resilience and persistence in making Nigeria work for them. Despite our woes, we must be hopeful. As Professor Attahiru Jega noted, “Democracy cannot be established without democrats”. Citizens have to play their roles in the rebuilding of this country and we must continue to uphold democratic principles by demanding transparency and accountability, free and fair elections, substantive policies, etc.

“It is up to us now – those of us who shape the destiny of our countries – to do what we can to improve matters. Mere condemnations are not enough; it is time for action.” – Abubakar Tafawa Balewa